“The Moscow Sax Quintet is something else… a remarkable ensemble. Their renderings of “Yardbird Suite”, “Donna Lee” and other bop classics – complete with 5-part transcriptions of Charlie Parker solos – are stunning. As an ensemble, the quintet’s work stunningly illustrates a capacity of jazz undefined by nationality.” – Don Heckman, Los Angeles Times 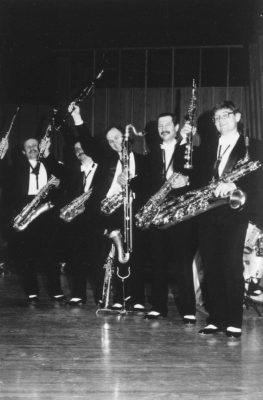 This sizzling Jazz saxophone quintet of Russian musicians totally captures the Jazz feeling with their magical sound on this Arkadia Records album, entitled The Moscow Sax Quintet: The Jazznost Tour. Vladimir Zaremba’s arrangements of classics by Fat Waller, The Beatles, George Gershwin, and Charlie “Bird” Parker create a unique harmonic Big Band sound in the spirit of Supersax. When they interpret Bird’s improvised solos, playing them in 5-part harmony at a breakneck speed (as if they were one instrument), you can hear the mastery of their skill in the music.

“… astonishing is the breathtaking virtuosity of the ensemble work.” – Joel Klauber, Jazziz Magazine

Founded in 1987 by Vladimir Zaremba, a professor at the Moscow Philharmonic Society; he and the group grew up steeped in the American Jazz tradition through the famous ‘Voice of America’ radio broadcasts. The Moscow Jazz Quintet consists of five saxophonists along with a rhythm section that play a variety of reed instruments such as Soprano Sax, Alto Sax, Baritone Sax, Tenor Sax, Clarinet, and Bass Clarinet, in a style that critics have described as highly refined Jazz music.

Long famous for their virtuosity in the classical arena, Soviet musicians have not exactly been at the forefront of the Jazz scene. However, if the Moscow Sax Quintet is any indication, there is good reason to believe they will secure their place in the world of Jazz. This Arkadia Records production, The Moscow Sax Quintet: The Jazznost Tour, not only showcases a magnificent night of straight ahead Jazz music, but proves that music is the universal language by featuring the groundbreaking Soviet group’s mastery of the American art form.

“… an amazing display of pure musicianship of the highest caliber… I couldn’t pull myself away… it’s non-stop and sweet, sweet jazz… Supersax with honey… I love the Moscow Sax Quintet! If you buy only one this year you simply must make it this one.” – David J Gibson, Saxophone Journal

“The Moscow Sax Quintet resurrects the thrilling rush of bebop solo transcriptions played by a saxophone choir… rendered in sumptuous, spirited fashion, with surprising touches. All five reedists of the MSQ are imaginative soloists. They’re supported by the relentlessly swinging drummer and the pianist who responds to the reed onslaught with pithy solos.” – Larry Nai, Jazziz

“Back to the woodshed, Birdmen of the world! This quintet of Russian saxophonists could give Supersax the shakes. Its ensemble work takes off, soars and lands faultlessly. These performances are no academic exercise; they swing through and through, including the musicians’ own improvised solos. This mission from Moscow is sure to be a hit wherever if performs.” – Owen Cordle, JazzTimes

“…full of brisk solos and the negotiation of difficult chord changes… the quintet is really able to strut their stuff, particularly on the jubilant “Smashing Thirds” and the sensitive “Waltz For Debby”.” – Jon Morgan, Cadence

“The MSQ places its personal stamp on Bird’s timeless music and adds a few new wrinkles to compositions by Jimmy Giuffre, Bill Evans, the Gershwins and others. The members of the MSQ have chops to burn… they speak the language of jazz fluently and work exceptionally well together.” – Jack Bowers, Jazz News

About The Moscow Sax Quintet:

The Moscow Sax Quintet – a group whose many feats include playing versions of Charlie Parker’s improvised solos in five-part harmony and at breakneck speed – was founded in 1987 by Vladimir Zaremba, a professor of saxophones at the Moscow Institute of Culture. Born in Magnitogorsk in 1949, Zaremba was turned on to jazz by recordings he heard on the Voice of America. He left his home town as a teenager to travel with a group, and later played in the Army band, before moving on to Moscow. There he trained at the famous Glessin Music Institute and has with played number of small jazz groups and with symphony orchestras. 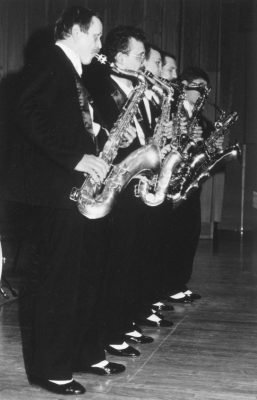 Zaremba formed the MSQ at the Moscow Philharmonic Society, recruiting his band, for which he plays 1st tenor and other woodwinds, from the cream of the crop. The group includes Alexander Boychuk, who plays 1st alto, soprano sax, and clarinet; Gennady Pakhtusov, who plays 2nd tenor and flute; Oleg Ageyev, who plays 2nd alto and soprano sax; and Vladimir Konibolotsky, who holds down the baritone sax position and also plays clarinet. In addition to this horn quintet, there is a rhythm section made up of Vladimir Soloviov on piano, Igor Shestov on bass, and Alexander Churikov on drums. The musicians boast an impressive array of academic credentials. They are also frequent performers at concerts and festivals. And their radio and television credits date back to the Soviet era.

The modicum of fame achieved by the group in Russia did not, of course, translate directly into international renown. In fact, it took a fortuitous string of circumstances to bring the MSQ to the attention of an American audience. John Garvey, professor emeritus at the University of Illinois, played the pivotal role in this discovery. On a trip to Russia, Garvey met group-leader Zaremba, and saw the band perform—during a Miss USSR contest—with a singer from the Bay Area named Margie Baker. Displaying great versatility and originality, as well as a deep understanding of Charlie Parker’s music, MSQ sent Garvey home excited, and with a tape. Back in America, Garvey played the tape for Bill McFarlin, Executive Director of the International Association of Jazz Educators (IAJE), who invited the group to the IAJE’s 1990 New Orleans Convention.

At the convention, MSQ put on a real show, blowing away the audience with a combination of virtuosity and synchronicity. Bob Karcy – President and Founder of New York’s V.I.E.W. Video and Arkadia Records – who was in attendance, was so impressed by the MSQ that he decided to record them and make their music available to an American audience. With the help of interpreters, he was able to put together a 5-camera video production and a 24-track audio recording of the band’s concert performance at Northeastern Illinois University in Chicago, the final stop of their first American visit. The result was the Jazznost Tour, which was first released, to great acclaim, on video cassette, and audio has now been released on the Arkadia Records label.