French Gypsy Jazz guitar legend Django Reinhardt made more music with two fingers than most mortals could with twenty. This timeless Arkadia Records collection of classic compositions, entitled “Django Reinhardt: Nuages”, features the Hot Club of France with Stéphane Grappelli and the great Benny Carter Orchestra, as well as two newly discovered performances with legendary saxophonist Coleman Hawkins. The recording has been remastered to a stunning clarity that highlights the genius of this modern guitar innovator. 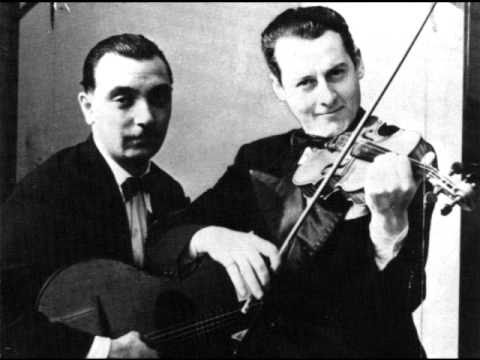 “Out of the vaults: These historic cuts, recorded between 1936 and 1940 at the Hot Club of France, show Reinhardt at the apex of his career, after the fire that left him with two unusable fingers on his fret hand… Kudos to Arkadia for bringing this one back from the great beyond.” – Pete, Soundboard

Born Jean-Baptiste Reinhardt, Django spent his early years traveling throughout Europe with his community of gypsies until his early teens, when they settled outside of Paris. Reinhardt severely burned his left hand in a fire, forcing him to relearn the guitar without the full use of his hand. What developed was a unique method of guitar playing that unquestionably influenced his individual sound and wowed musicians with the ability to play scales with only two working fingers.

“As the fledgling Arkadia Jazz label’s first historical project, they have scored a musical bullseye, hitting Django Reinhardt’s most fabled period down the center. Arkadia has actually done a better job of remastering these tracks than a lot of the major labels’ attempts… the variable yet decent sound is usually bright and forward with little distortion. As a single-disc introduction to an ingratiating group of great musicians, this release is very competitive.” – Richard S. Ginell, All-Music Guide

Django Reinhardt is arguably Europe’s most influential Jazz musician. With this remastered Arkadia Records recording, “Django Reinhardt: Nuages”, the virtuosic sound and fabled legacy of Django Reinhardt are captured for future generations to cherish. Django Reinhardt’s unique personality and unparalleled inventiveness made him one of the most important musicians and instantaneously recognizable sounds in Jazz.

“Nothing more need be said about this material… it is bona fide classic. It is amazing how well his guitar was recorded on these sixty-year old performances!” – 20th Century Guitar Magazine

“These are remastered classic sides by the great Swing-era gypsy guitarist Django Reinhardt, including the cream of his recordings with the Quintet of the Hot Club of France, which was founded in 1934. Included in the 18 cuts are newly restored sessions with American Swing giants Coleman Hawkins, Benny Carter and Dicky Wells.” – Marvin Randolph, Florida Sun-Sentinel

“Wild set that finds the gypsy great not only in familiar settings but working out with Benny Carter and Coleman Hawkins as well. A tasty find with state of the art remastering and good vibes for all ax fans.” – Midwest Record Recap

“No self-respecting guitar player should be without this disc. The 18 tracks presented here have been digitally remastered…this superb package is a fine way into the Reinhardt legacy if you’re on a limited budget”. – ID Magazine, Canada

“For anyone who appreciates the feel and sounds of swing, the CD is a pure joy. The recording not only gives you an opportunity to revisit the talents of Django but also jazz violinist Stephane Grappelli, who died only recently, and who was an essential ingredient in the Reinhardt quintet. Each of the 18 cuts is a gem.” – Cam Miller, The Union Entertainment

“The liner notes do a more than adequate job at dissecting the individual pieces on Nuages into their historical significance; more important is the sheer, raw exuberance of Reinhardt’s talent. Listening to Reinhardt extract the last ounce of passion from his instrument without a single effect or added amplifier is a humbling experience every budding guitar player should go through.” – Jason Plender, ink 19 Southeast New Music Source

Django Reinhardt, originally named Jean Reinhardt, was born on January 10, 1910 in Liberchies, Belgium and died May 16, 1953 in Fontainebleau, France. He was of Roma (Gypsy) parentage. He lived his young life on the outskirts of Paris in a disreputable area called la Zone where the gypsies, in medieval tradition, gathered their caravans. 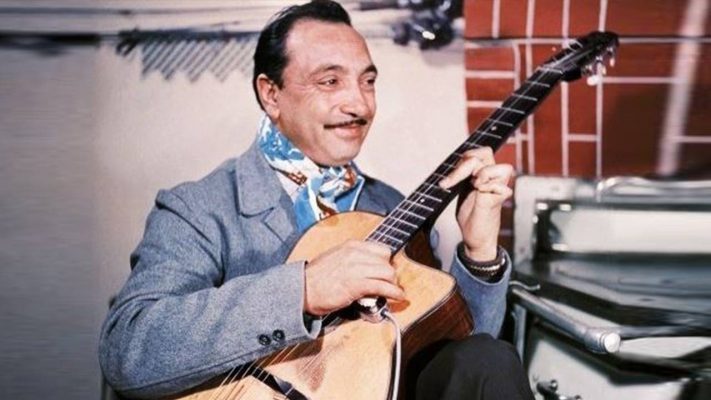 He traveled through France and Belgium as a boy and young man learning to play violin, guitar and banjo. Although he was self-taught, he was amazingly skillful and soon was performing on street corners and in cafes. WWI had brought jazz to Paris and Django was entranced by this new music, soon mastering the art of improvisation.

On October 26, 1928, Django was severely burned, his left hand maimed, in a caravan fire. During many months of recuperation he taught himself to play again using primarily the index and third fingers of his left hand.

In 1934 the guitarist met violinist Stephane Grappelli who was to become his musical partner for some 15 years in Le Quintette du Hot Club de France. The Quintette toured Europe and recorded with great success until the beginning of WWII. Reinhardt returned to France where he became further immersed in jazz. During his career he played with many famous American musicians, including Dizzy Gillespie, Coleman Hawkins, and Louis Armstrong.

In 1946 Duke Ellington invited Django to join his band in the U.S. where he was introduced to the electric guitar which he quickly mastered. Ellington’s drummer Sonny Greer was awed by Django: “…That cat could take a guitar and make it talk. Nobody played like him….” Upon returning to Paris, Django organized his Nouveau Quintette (occasionally joined by Grappelli), and began touring again. But as a biographer said, “He came to America playing swing. He returned to Paris playing modern jazz.”

The pressures of the music eventually led Django to hang up his guitar, during which time he devoted himself to painting. He emerged in 1951, revered by American jazz musicians who flocked to play with him. But he left Paris in his caravan and took his family to Samois-sur-Seine. In 1953 American impresario Norman Granz lured him out of seclusion for Jazz at the Philharmonic. Before he could join the tour, Django suffered a stroke and died on May 16, 1953, just 43 years old. – Sandra Burlingame, Earshot Jazz