Born in Glasgow, Scotland in 1957, Nigel was drawn to the guitar in the early 70s, along with the rest of his generation. Influenced by the rock music of the day, Nigel was also exposed to the gypsy genius Django Reinhardt, who made a big impression. His natural talent was honed on many tours through the highlands, the UK, France, Holland, Germany and others, playing fusion, Celtic Rock and with Gaelic singers.

In 1987, Nigel joined the jazz/pop band Hue and Cry, opening for such arena rock artists U2, Madonna and Simply Red. The band also employed some of the biggest names in jazz on their recordings–Ron Carter, John Scofield, Tito Puente, Michael and Randy Brecker, to name a few. Treading the line between pop and jazz, the band occupied an artistic triumph that is rarely reached: crossing over. 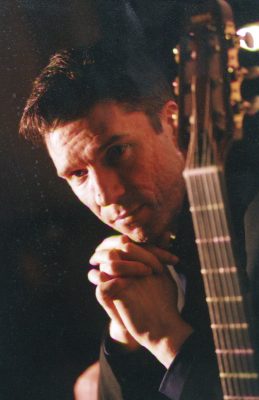 In the 90s, Nigel performed with Carla Bley and Steve Swallow at the Glasgow

International Jazz Festival, appeared with Jan Akkerman and Spanish guitarist Ximo Tebar at the North Sea Jazz Festival, and in Cannes, performed with Akkerman and Norwegian Terje Rypdal, and with a big band that featured 11 guitarists! The decade also marked adoption of the nylon string guitar as his primary instrument. The Spanish guitar engaged Nigel’s imagination, and set forth a multitude of artistic possibilities for the instrument, which ranged from the Brazilian style to the gypsy tinged sounds that were laid early in Nigel’s mind through the influence of Django Reinhardt.

The 11 guitar spectacle in Cannes was witnessed by Arkadia CEO Bob Karcy, who was immediately struck by Nigel’s deft playing. Karcy remembers “Nigel’s fluid, improvised lines and note selections were so natural? I was very impressed, and he stood out from all the other guitarists.” Over the next several years, the two kept in contact, ultimately leading to an exclusive recording contract with Arkadia Records.

So far, Nigel has recorded two highly acclaimed albums for Arkadia Records. The first was “Grand Hotel Europa”, followed by “Nigel Clark in Concert: Live from Scotland”, which is available as a set with both a DVD and CD. 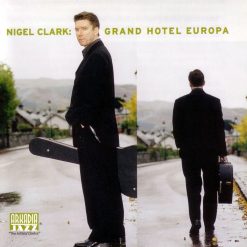 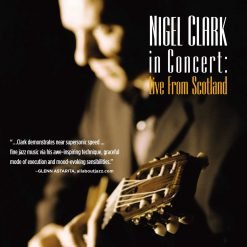