“4.5 STARS! …Milagro sneaks up on you. …and insinuates itself into your consciousness and CD player. …a program of glowing, thoughtful tunes. Pasqua’s playing is warm and introspective throughout…” – Down Beat Magazine

Featuring renowned Jazz legends Michael Brecker (saxophone), Dave Holland (bass), and Jack DeJohnette (drums), among others, this Postcards Records album, Alan Pasqua: Milagro, is the pianist / composer’s debut as a leader. The musical promise and aptitude he displayed playing with Santana, Bob Dylan, Aretha Franklin, Tony Williams, and Elton John is fully realized on this inventive album. Pasqua’s playing is both melodic and hard-driving, and his supreme gifts as a composer and arranger are abundantly featured. 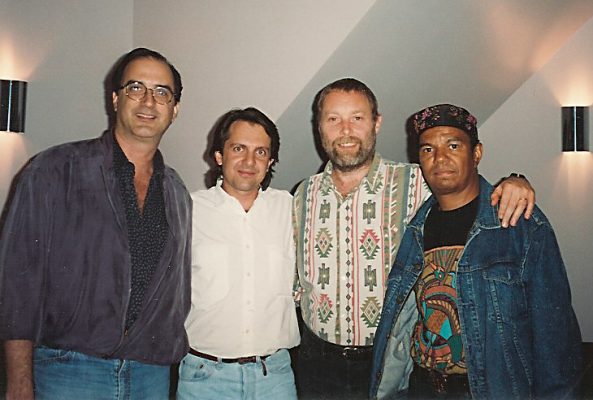 “4 Stars… Alan’s piano is clear and has a beautiful sound. …what this album presents is hard-core and, simultaneously, impressionistic jazz.” – Swing Journal (Japan)

Also featuring five of New York’s first-call brass and woodwind session players, Pasqua’s playing touches the senses as he effortlessly ranges through the gamut of emotions and styles he perfected throughout his varied career, such as the tender elegance of traditional Jazz piano, the rasping and gritty power of Rock organs, and the layered synthesized riffs of the New Wave. Although his most famous composition is likely the theme for the CBS nightly news, which has played nightly on television for over twenty years, there is no denying Alan Pasque’s musical seriousness. On this album from Postcards Records, entitled “Alan Pasqua: Milagro”, the Jazz pianist/composer displays his vibrantly original musical vision, and in doing so propels his music into the Jazz consciousness.