Jazz Pianist Alan Pasqua has dedicated his second Postcards Records album to the incredibly rich tradition of Jazz. On the appropriately titled “Alan Pasqua: Dedications”, his compositions cover the stylistic spectrum from Swing and Bebop through today’s polytonality, and are heard in the trio, quartet, and quintet settings. Building from a core trio featuring Dave Holland on bass and Paul Motian on drums (they have rarely recorded together before), Pasqua adds Michael Brecker (seldom-heard on soprano saxophone) on one tune, and then creates two different quintets, one with both Michael and Randy Brecker, and the other with Randy Brecker and Gary Bartz. 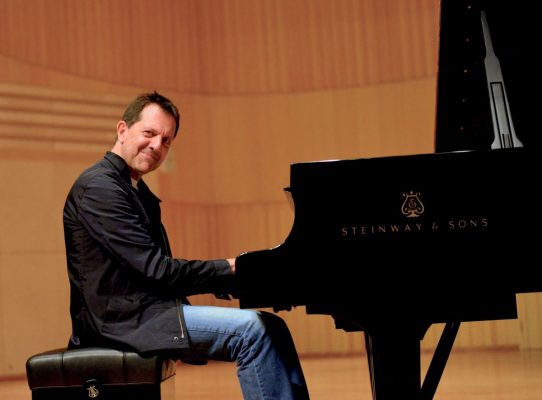 “Dedications”, says Pasqua, “is my way of paying tribute to the positive influences on my life. Art, music, spirituality, family… I draw upon all of these whenever I’m playing or composing. I wanted to take tradition and put my own stamp on it,” he continues, describing how he approached the compositions. “I found myself going back to my roots in jazz, back to an earlier perspective on jazz, to the styles I grew up with musically, and then reshaping the traditions, embellishing them – finding my own voice, making a more modern statement. It was like taking one step backward to take two steps forward.”

Outside of Jazz, Pasqua has played with Carlos Santana, Bob Dylan, Aretha Franklin, and Elton John, but with this album, the pianist/composer proves his true Jazz nature. From the lush “Ellingtonia” through the ethereal modality of “San Michele”, on this Postcards album, entitled “Alan Pasqua: Dedications”, the renowned pianist boldly accomplishes the challenging undertaking of leaving his unique and masterful imprint on this homage to the giants of the Jazz heritage.

“Leader and sidemen alike perform the music at an exceptional level… A fine recording.” – JazzTimes, July/August 1996

“On this focused and passionate record, Alan Pasqua is joined by bassist Dave Holland and drummer Paul Motian – two players with stellar reputations who don’t appear together often. Motian’s post-’70s playing tends to be free and fragmented, but he approaches Pasqua’s material with a straight-ahead sense of swing. The leader, for his part, became known as a synth player following his work with the Tony Williams Lifetime in the late ’70s, but here his playing and writing are closer to acoustic post-boppers like Mulgrew Miller and Kenny Barron. Pasqua’s elegance and fluidity are amply apparent on the trio features: “Mr. Softee”, “Taiowa”, “Dedicated to You”, and “Grace”.

“Originally released on the Postcards label, now owned by Arkadia Records, “Dedications” is pianist-composer Alan Pasqua’s second release for the label which followed the critically acclaimed “Milagro”. On “Dedications”, Pasqua reaps the benefits of an all-star supporting cast which includes the mighty rhythm section of drummer Paul Motian and bassist Dave Holland. Pasqua, along with the talented horns of Randy Brecker, Michael Brecker and Gary Bartz, offers a generous mix whether performing in piano trio mode or utilizing the proficient skills of these top-flight soloists on selected tracks.

Pasqua demonstrates simply stated elegance behind the keys which is evident from the onset with the composition titled, “Homage”. A mid-tempo swing featuring a lyrically charged alto sax solo by Gary Bartz along with Randy Brecker’s clear toned, adept phrasing. Here and throughout, Pasqua also shines as a composer who possesses laudable melodic and harmonic tendencies within the framework of his enticing arrangements. It is also quite apparent that Pasqua felt comfortable working with Holland and Motian as he effortlessly comps with brief, often supple left-handed block chords. Pasqua’s sublime, gorgeous phrasing glows on the somber ballad, “San Michele” as Michael Brecker’s compassionate, dream-like soprano sax work provides warm overtones to this beautiful composition.

On “Mr. Softee”, Pasqua embarks on the piano trio course with a rhythm section that is fully cognizant of piano trio art, as their combined experience and resumes are well documented in these and other areas. “Ellingtonia” captures Duke’s spirit as Randy Brecker utilizes some plunger action on his trumpet, which is certainly a throw back to the old big band era… Perhaps a lost art these days? Pasqua’s lush voicings are prevalent on “Dedicated To You” as he once again engages the piano trio format. The closer, “Grace” is a lovely soul searching solo vehicle for Pasqua and is somewhat reminiscent of the Bill Evans school where every note speaks encyclopedic volumes.

A far cry from his days with the late Tony Williams and the fusion version of his now historic “Lifetime” band. Here, Alan Pasqua charms us with sincere, melodically memorable compositions, as the stellar ensemble work is just an added bonus. Dedications is artistically expressive and makes for an enticing listening experience.” – Glenn Astrita, All About Jazz