“4 Stars… this entire team of spelunkers digs where we’ve seldom gone before, flooding dark chambers with their flashes of brilliance. What “Workman” brings to life on “Cerebral Caverns” is fantastically rare and rewards repeated listening.” – Down Beat Magazine 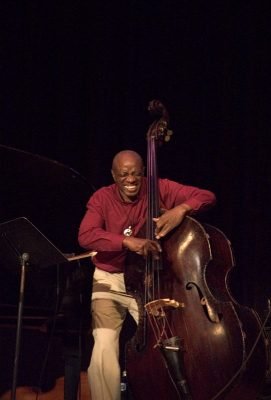 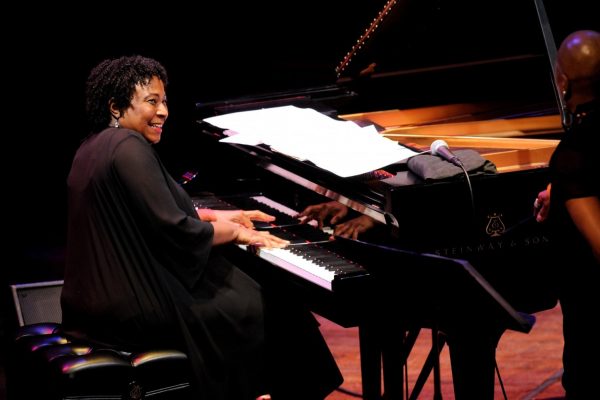 Incorporating his straight-ahead and free Jazz influences with both classical and Eastern music sensitivities, Reggie Workman, maestro and former bassist for John Coltrane, has taken the next exciting step beyond his Postcards debut, “Summit Conference“, with this album entitled “Reggie Workman: Cerebral Caverns”. Also featuring renowned members of the Jazz elite, such as Al Foster, Julian Priester, and Geri Allen, this recording results in a cohesive album that boldly explores the wide and varied Jazz landscape.

“…aesthetically adventurous… …the innovative instrumentation and the vivid dynamics of the recorded sound make it a feast of new sonic colors, one ear thrill after another.” – Stereophile

The album fast forwards into the musical future, to a heady mix of traditional Jazz instrumentation combined with the added texture and flavors of harp, tablas, samples, and electronics. By varying the combination of players from piece to piece, Workman has produced a kaleidoscope of differing musical strata on this album, entitled, “Reggie Workman: Cerebral Caverns”. By using a broad and imaginative musical palette on this compelling recording, Workman not only pushes forward the bounds of Jazz, but also never fails to rivet the listener’s attention.

“Workman, continually stretching, exploring and experimenting, just might be the future of jazz.” – CMJ

“One disc, 55 minutes approximately. Digitally mastered, with a slight warmth to the sound, which fits perfectly with the eastern sounds of some of the tracks.

The first track is very introspective. Workman (bass) plucks just the right notes creating an intelligent sounding bottom end. Gerry Hemingway (drums, electronic drum pads) fills in very delicately, never over-powering the others. Elizabeth Panzer (harp) plucks some tones which add a surreal feel to the track. The star instrument on this track is played by Sam Rivers (flute), where notes seem to tumble out in short quick bursts, or individually with space left between them, which picks up the overall feel of the tune for a fine finish.

The second tune is a trio of Workman, Geri Allen (piano) and Hemingway. It’s played fairly free, but not so far out that it can’t be enjoyed by the jazz listener new to this music. The third tune has an insistent underlying beat to it, supported by Al Foster’s drums, which allows both Rivers on tenor sax and Julien Priester (trombone) to both trade back and forth, and meld their instruments together in a somewhat atonal mode. The track ends with Workman coming to the front with just the right notes for a satisfying end.

The fourth track begins with Priester and Modak trading sounds back and forth, complimenting each other on their respective instruments in a call and response mode. Hemingway’s drums begin about half way through and are very subtle. Likewise Workman’s bass, which is played very sparingly. Both Rivers, on tenor, and Priester come in very subtly. All of this is played to Modak’s tablas, which continue out front. This composition is very open and played slowly which gives it a deep feeling of introspection. It ends on a floating note much like the entire track.

The fifth tune begins with Allen’s piano out front in a mid-to-slow tempo. Again, the notes are open with plenty of space between them. Rivers plays some beautiful flute that dances around the sound of the piano. Workman’s bass and Foster’s drums are very quiet, but form a good backdrop for the others. Things pick up when Priester comes in, playing in a complimentary mode to Rivers’. The entire group, including Panzer’s harp, picks up the tempo, and then slows it down once again for more of Rivers’ flute. The track fades out like smoke in the air.

Track six has Workman’s plucked bass playing with Panzer’s harp. Hemingway’s drums are very subtle here, and together the two weave a very open sonic blanket that is definitely venturing into seemingly unstructured music. This track is a good example of letting musicians play seemingly at will, but the impression is of music carefully written and arranged, but left open on purpose. This track tries very hard “to be something”, but doesn’t quite stand up like the others in the end.

The seventh composition has Rivers on soprano sax with Workman’s bass, and Allen’s piano playing in and out of each other. Hemingway’s drums are played to fill up any open areas. Allen’s piano takes center stage, sounding not unlike Cecil Taylor in tone and note clusters. Rivers’ soprano is unmistakable here, as he plays against the piano in a flurry of intense notes. Firing cluster after cluster, Rivers takes center stage, with everyone following his lead. This is another example of music seemingly made up on the spot, but still with a composed feeling to it. About three quarters through, Workman plays his bass in a walking be-bop mode that’s very unexpected, only to dissolve it into what the rest of the group are playing. The final eighth track begins with Workman bowing his bass with Panzer’s harp and Allen’s piano filling in spots around Workman. This is a good place to hear Allen use the piano as a true stringed instrument.

This is a very well thought out and played group of compositions. All the players are sensitive to the compositions and to each other. The blend of different players is inspired. While this may be a bit abstract for someone used to listening to straight ahead jazz, it’s not difficult to get into if the listener will give it a chance. Another album by Workman, in the same mode, is “SUMMIT CONFERENCE” (Postcard Records) which has both Priester and Rivers playing all over it. Both are recommended to those with an adventurous, open listening spirit, who think that jazz should continue to evolve.” – Stuart Jefferson, Top Contributor: Top 500 Reviewer on Amazon

“I like how Workman broke the group up into different arrangements for each piece, allowing space for each of the players. Al Foster’s sound is energetic, Geri Allen stretches in a way I don’t hear her on her own CDs.

There’s all out playing by Sam Rivers and Julian Priester on Fast Forward. Half of my soul is a combination of eastern music and the western ballad. The entire CD works well with an eastern influence, particularly the combination of bass, harp, flute and tablas.” – Vine Voice

“HALL OF FAME – 5.0 out of 5.0 Stars – Outstanding Album: “Cerebral Caverns” is an outstanding album made by some of the great jazz names of the 60s. Bassist Reggie Workman, who gained fame as a member of John Coltrane’s quartet and as a sideman on some classic Blue Note albums of the 60s, has assembled an all-star group featuring some great players who first made their names in the 60s – Sam Rivers, Julian Priester and Al Foster – and some great players of the 80s and 90s – Gerry Hemingway and Geri Allen. “Cerebral Caverns” alternates between spacious, Middle Eastern-tinged soundscapes like “Cerebral Caverns”, “Ballad Explorations” and “Seasonal Elements”, largely due to the inclusion of tabla player Tapan Hudak and harpist Elizabeth Ranzer, and modern jazz explorations like “Fast Forward”, “Half Of My Soul” and “Evolution”. It is quite refreshing to see that Workman, who helped forge the new sound in the 60s on the seminal Coltrane Village Vanguard recordings, is still exploring jazz’s future almost forty years later.” – Brad Richman

Reggie Workman has long been one of the most technically gifted of all bassists, a brilliant player whose versatile style fits into both hard bop and very avant-garde settings. He played piano, tuba, and euphonium early on but settled on bass in the mid-’50s.

After working regularly with Gigi Gryce (1958), Red Garland, and Roy Haynes, he was a member of the John Coltrane Quartet for much of 1961, participating in several important recordings and even appearing with Coltrane and Eric Dolphy on a half-hour West German television show that is currently available on video (The Coltrane Legacy).

After Jimmy Garrison took his place with Coltrane, Workman became a member of Art Blakey’s Jazz Messengers (1962-1964) and was in the groups of Yusef Lateef (1964-65), Herbie Mann, and Thelonious Monk (1967). He recorded frequently in the 1960s (including many Blue Note dates and Archie Shepp’s classic Four for Trane).

Since that time, Workman has been both an educator (serving on the faculty of music schools including the University of Michigan and the New School in New York City) and a working musician, and has played with numerous legendary jazz musicians including Max Roach, Art Farmer, Mal Waldron, David Murray, Sam Rivers, and Andrew Hill (Rivers and Hill joined Workman for the 1993 session, Summit Conference on Postcards Records).

In the 1980s, Workman began leading his own group, the Reggie Workman Ensemble. He also began a collaboration with pianist Marilyn Crispell that lasted into the next decade (the two acclaimed musicians reunited for a festival performance in 2000).

During the ’90s, Workman was not only active with his own ensemble, but also in Trio Three, with Andrew Cyrille and Oliver Lake, and Reggie Workman’s Grooveship and Extravaganza.

In recognition of Reggie Workman’s international performances and recordings spanning over 40 years, he was named a Living Legend by the African-American Historical and Cultural Museum in his hometown of Philadelphia; he is also a recipient of the Eubie Blake Award. – Scott Yanow and Joslyn Layne