Distinguished ambassador of the jazz community to the world-at-large, Dr. Billy Taylor was born in 1921 in North Carolina to a musical family, where everybody played piano and sang. Unimpressed with the sound of his own voice, Taylor decided at a young age that he would fuse both family pursuits into one and try to “sing through the piano.” It was a fortuitous decision. Classical piano lessons with Henry Grant and experimentation with saxophone, drums, and guitar prepared the aspiring musician for his first professional appearance at the keyboard at the age of 13—his take for the performance was exactly $1.00. At Virginia State University, where Taylor was enrolled as a Sociology major, composer/pianist Undine Moore advised Taylor that his future was with music and piano. Heeding Moore’s prescient counsel, Taylor stepped up his musical studies while in college. Then, shortly after graduation in 1942, Taylor set out for New York City, jazz capital of the world, to see where his talent would take him.

Taylor had been in the Big Apple for less than a day when he found himself sitting in at Minton’s jamming with Ben Webster. Two days later he was invited to join Webster’s group. That same night he met Art Tatum who was soon to become his mentor. Playing with Dizzy Gillespie, Max Roach, Don Byas, and Oscar Pettiford, the newcomer quickly immersed himself in the local music scene. His light touch and musical intelligence took him to Broadway – where he played with Cozy Colt’s Quintet for Billy Rose’s show “The Seven Lively Arts”, to Machito’s mambo band, to gigs as an accompanist for Kevin Spencer at the Cafe Society Uptown, and to the piano chair of the Slam Stewart Trio. In 1946 Taylor embarked on an eight-month tour of Europe with the Don Redman orchestra, the first American jazz band to visit the continent after World War II. He returned to New York in 1948 to form a duo with organist Bob Wyatt and to play with Billie Holiday in a Broadway revue called “Holiday on Broadway”. A year later, he was hired as the house pianist at Birdland, where he played with the all the greats, remaining there longer than anyone else in that legendary club’s history. He has gone on to play solo and with a series of trios that rightfully belong in the pantheon of jazz history.

Having established himself as a performer of note, Taylor launched a recording career that has spanned six decades and has gone on to include more than two dozen albums which he has recorded as a leader. His first effort as a leader, now released on CD with Errol Garner, is called “Separate Keyboards”. Among Taylor’s 1950s recordings, was an album he made with Candido, the legendary Cuban drummer, who had joined his band after Dizzy Gillespie had introduced the two musicians. Some of the other albums he recorded in the 50s were “My Fair Lady Loves Jazz”, “Billy Taylor at Town Hall”, and “Taylor Made Jazz” in 1957, which featured Duke Ellington’s sidemen. The 1960s saw the release of such albums as “Custom Taylored” and “Brazilian Beat” with the Billy Taylor Septet, as well as“I Wish I Knew How It Would Feel To Be Free”, whose title song is probably the most popular tune that Taylor has ever written. Following a self-imposed recording hiatus in the 1970s, when he focused his energy on broadcasting projects, Taylor returned to recording with gusto in the 1980s beginning with “Where You’ve Been”¸ and including, “White Nights and Jazz in Leningrad”, “The Jazzmobile Allstars”, “Solo”, “You Tempt Me”, “Dr. T.”, “It’s a Matter of Pride”, “Homage”, and culminating with “We Meet Again”. In the 1990s Taylor has kept the music coming. In 1996, the indefatigable pianist signed an exclusive recording contract with New York’s Arkadia Jazz label for whom he has completed two albums, “Music Keeps Us Young” and a solo piano album entitled “Ten Fingers, One Voice”. There are several other projects in the works, including an educational video and new enhanced CDs.

In addition to playing and recording, Taylor is a gifted writer of and about music. In 1949 he published his first book, an instructional manual for Be-bop piano. By that time he had also begun to publish the first of what was to become a body of nearly 300 songs, including the aforementioned “I Wish I Knew How It Would Feel To Be Free”, which was selected by the NY Times as “One of the Great Songs of the Sixties,” and is presently featured as the anthem of Rob Reiner’s film, “Ghosts of the Mississippi”, playing during the opening and closing credits. Impressed by the range and depth of his work, classical musicians have asked Taylor to compose symphonic works for jazz piano. Commissioned by the Atlanta Symphony, Taylor’s “Peaceful Warrior” – a work dedicated to the memory Dr. Martin Luther King—was premiered under the direction of Robert Shaw. Itutilizes a full symphony orchestra, a mixed chorus and a jazz trio. “Make a Joyful Noise”, a six part suite inspired by the 97th Psalm, follows the tradition of the Ellington Sacred Concerts. Other notable composition credits include “For Rachel” – a dance suite which resulted from collaboration with choreographer Rachel Lampert, the score for Wole Soyinka’s off-Broadway hit, “The Lion and the Jewel”, and “Suite for Jazz Piano and Orchestra”, – commissioned by Maurice Abravenal and the Utah Symphony. Other orchestral works include “Impromptu”, “Conversations”, “Theme and Variations” – commissioned by the National Symphony – and “Step Into My Dream”, written for the David Parsons Dance Co. His most recent composition, “Homage”, was written for the Julliard String Quartet and was nominated for a Grammy. Accomplished as he is on the piano, as a recording artist, and as a composer, Taylor is perhaps best known as the public face of jazz, a man who has spent much of his life bringing jazz to the airwaves. In the 1960s, alarmed by the reorientation of his record company, Capitol Records, towards upstart rock and rollers, (the Beatles had just signed on) Taylor decided to forget recording for a while and devote himself instead to radio and television. His success on WLIB in New York City, as a performer and host, brought him to WNEW, the city’s top independent station. In the 1970s Taylor began an extended engagement as the Musical Director of the “David Frost Show”, a variety show whose guests included the likes of Benny Goodman, Louis Armstrong, Count Basie, and Buddy Rich, who came to play and be interviewed on the show. Involved at various levels with several different radio and television stations, Taylor somehow found time to produce the “Billy Taylor Show” on Channel 47. Later on he served as Musical Director for Tony Brown’s Black Journal Tonight and became host of National Public Radio’s “Jazz Alive” and the 13-week series, “Taylor Made Piano”, both of which won Peabody Awards. Taylor’s career in broadcasting peaked in the early 1980s when he was hired as the arts reporter for the CBS Sunday Morning with Charles Kurault. To date, he has profiled more than two hundred and fifty artists for the program.

Sparked by his experience in the late 1950s at a Yale University conference which explored ways to improve musical instruction in public schools, Taylor has never stopped instructing the public about the idiom he loves. His first endeavor in broadcasting was essentially an educational one. aired in 1958, the 13-part series was called “The Subject is Jazz”, and was the first history of jazz produced by the new National Educational Television Network (NET). The featured band comprised Doc Severinson, Tony Scott, Jimmy Cleveland, Mundell Lowe, Earl May, Eddie Safranski, Ed Thigpen, Ossie Johnson, and Taylor himself. Guests on the series included Duke Ellington, Lee Konitz, Langston Hughes, Aaron Copeland, and Bill Evans. His pedagogical impulses now awakened, Taylor continued to look for ways to teach people about jazz. After serving as a visiting professor at Howard University, the Manhattan School of Music, U.C. Irvine, North Carolina Central College, Shaw University, and many other colleges and universities, and as an adjunct professor at C.W. Post, Billy earned his doctorate from the University of Massachusetts, in the mid 1970’s. He is now the Wilber O. Barret Professor of Music there. He lectured widely and gave master-classes and seminars. In addition, he was the founder of Jazzmobile, a unique outreach organization which brings free concerts and music clinics to thousands in the inner-city.

Beyond the realm of the media, Taylor’s passion for jazz and his talents as a communicator brought him into prominence in public service circles. Dr. Taylor was appointed by the President to the National Council for the Arts, the first jazz musician since Duke Ellington to be so honored. He was only the third jazz musician to receive the National Medal of Arts. The others were Dizzy Gillespie and Ella Fitzgerald. He has led State Department sponsored tours to Hungary, the Middle East, and Latin America. He was adviser for jazz of the Kennedy Center for the Performing Arts in Washington, and the presenter of an on-going series, “Mentors and Masters,” at the Metropolitan Museum of Art in New York.

Multi-dimensional and much accomplished, Billy Taylor seems to draw energy from his own activity. Having just celebrated his 75th birthday and marked more than 50 years in jazz, he shows no signs of slowing down. Taylor suffered from a 2002 stroke, which affected his right hand, but he continued to perform almost until his death. He died after a heart attack on December 28, 2010 in Manhattan at the age of 89. 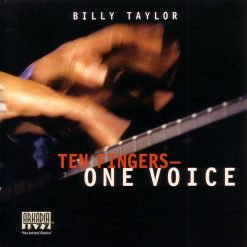 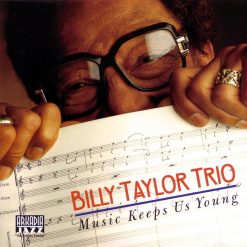